Sharjah: What’s in a name? Even a letter matters, says Thanavel Mathiazhaagan, an Indian worker in the UAE who is set to return home after being granted a waiver of nearly Dh750,000 in overstay fines.

The man from the Indian state of Tamil Nadu claims that he could not avail amnesty opportunities in the UAE in the last 20 years as his identity verification was not cleared from India due to a mismatch in his father’s name in documents back home and that shown in his passport. As it turns out, there was a spelling error in his father’s name in the documents in India.

Mathiazhaagan, 56, said he himself realised this (the reason for not getting the clearance) only after his latest request for repatriation was taken up by two social workers in the UAE after he sought their help to return home during the COVID-19 pandemic.

He told Gulf News that he had landed in the UAE in 2000 after paying Rs120,000 (Dh6,048) to a recruitment agent for a job in Abu Dhabi. This could be verified from the stamp on his employment visa entry permit — the only document that Mathiazhaagan has preserved, apart from a copy of the last page of his passport. He said the agent had taken his original passport, claiming that his residence visa would be stamped in the passport once he gets the medical fitness certificate issued.

“I took the medical test and waited for my employment visa. But, the agent kept delaying it and later I got to know that the company, which was supposed to hire me, had shut down.” Eventually, he said, the agent stopped answering his calls and could not be traced at all later.

“I stayed in a room with some people from my native place. I lived there for eight months with no job. After that I came to Sharjah and started doing odd jobs.” 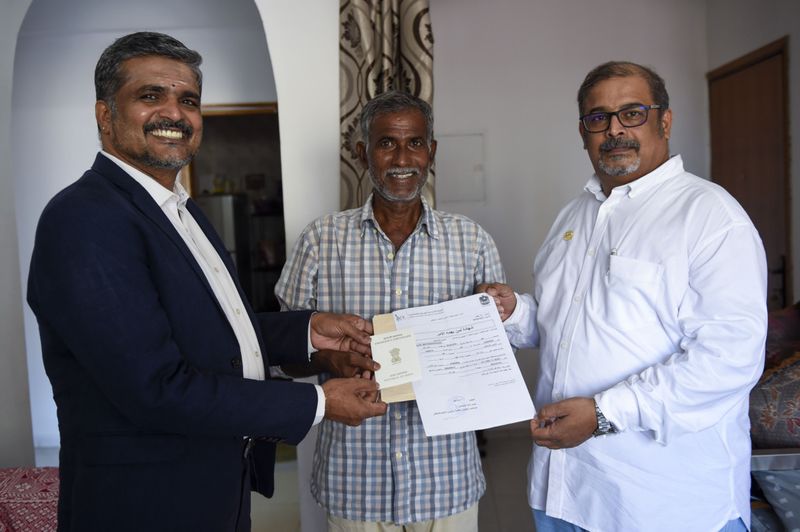 Mathiazhaagan said he illegally stayed in the UAE to feed his family by doing part-time jobs for various households and companies.

He claimed that he did try for returning home during the previous visa amnesty offers in the UAE and lost more than Dh10,000 to people who promised to help him with clearance of his documents that never came through.

Prior to the fine waiver announced till November 17 this year for people with expired visas or who had their visas cancelled before March 1 during the COVID-19 pandemic, the UAE government had granted visa amnesties in 2003, 2007, 2012 and 2018.

Gulf News could not independently verify if Mathiazhaagan had indeed applied for an emergency certificate (EC) — a one-way travel document issued to Indians without a valid passport, in order to facilitate their return home — during the earlier instances of amnesty.

However, A. K. Mahadevan and Chandra Prakash. P, who helped Mathiazhaagan get an EC through the Indian Embassy in Abu Dhabi, said he had failed to get identity clearance from India during the COVID-19 pandemic. They said they found out the reason behind the rejection only after Mathiazhaagan met Mahadevan, seeking help to return home.

“He was struggling with no job due to the coronavirus outbreak. He had no criminal record and he had missed his family for the last 20 years. He had never seen his youngest daughter and he couldn’t fly home when his father died or when his eldest daughter got married. So, I decided to shelter him in my house and support him to get the clearance for repatriation,” said Mahadevan.

“His name is Thanavel Mathiazhaagan as per the copy of the last page of his lost passport and the UAE entry permit,” said Prakash, the vice-president of Indian People’s Forum, a community organisation that also pitched to get a travel clearance for Mathiazhaagan.

“Unfortunately, the documents sent by Trichy Regional Passport Office to the Senthurai Police Station for his identity verification showed his father name as Thangavel whereas his father’s actual name is Thanavel — according to all other records. The additional letter ‘g’ in the name created the problem,” said Prakash.

The duo said they approached the Indian Embassy and the local departments in Mathiazhaagan’s village to rectify the mistake and process his documents. “Indian Ambassador to the UAE Pavan Kapoor took special interest in solving this case after the issue was taken up with him,” said Prakash.

Mahadevan said he was happy that Mathiazhaagan would be flying home soon and meeting his youngest daughter, who had not even been born when he left India for the UAE.

“He didn’t have a smart phone and he had never made a video call. It was from my phone that he saw his daughter for the first time. It was an emotional moment. Though they used to talk over the phone, both father and daughter burst into tears when they saw each other’s face for the first time.”

Mathiazhaagan said he was grateful to the duo and the officials who helped pave the way for his journey back home. “I am indebted to all of them and also the UAE government who waived off such a huge fine,” he said.