(CNN)A Russian TV crew flying over the Siberian tundra this summer spotted a massive crater 30 meters (100 feet) deep and 20 meters wide — striking in its size, symmetry and the explosive force of nature that it must have taken to have created it.

Scientists are not sure exactly how the huge hole, which is at least the ninth spotted in the region since 2013, formed. Initial theories floated when the first crater was discovered near an oil and gas field in the Yamal Peninsula in northwest Siberia included a meteorite impact, a UFO landing and the collapse of a secret underground military storage facility.
While scientists now believe the giant hole is linked to an explosive buildup of methane gas — which could be an unsettling result of warming temperatures in the region — there is still a lot the researchers don’t know.
An aerial view of the newest crater that appeared this year. It’s one of the largest that has appeared so far. In August 2020, the RAS Institute of Oil and Gas Problems, supported by the local Yamal authorities, conducted a major expedition to the new crater. Skoltech researchers were part of the final stages of that expedition. Credit: Evgeny Chuvilin
“Right now, there is no single accepted theory on how these complex phenomena are formed,” said Evgeny Chuvilin, lead research scientist at the Skolkovo Institute of Science and Technology’s Center for Hydrocarbon Recovery, who has visited the site of the newest crater to study its features.
“It is possible they have been forming for years, but it is hard to estimate the numbers. Since craters usually appear in uninhabited and largely pristine areas of the Arctic, there is often no one to see and report them,” Chuvilin said.
“Even now, craters are mostly found by accident during routine, non-scientific helicopter flights or by reindeer herders and hunters.”
Permafrost, which amounts to two-thirds of the Russian territory, is a huge natural reservoir of methane, a potent greenhouse gas, and recent hot summers, including in 2020, in the region may have played a role in creating these craters. 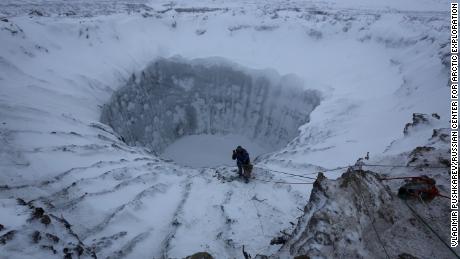 The Yamal Crater was the first of these massive holes to be discovered in the region. It was first spotted in 2013 but grabbed headlines in 2014.

Chuvilin and his team are among the few scientists who have been down inside one of these craters to investigate how it formed and where the gas that causes them comes from. Accessing the craters has to be done with climbing gear and there is a limited window — the craters turn into lakes within two years of being formed.
The scientists took samples of permafrost soil, ground and ice from the rim of a hole — known as the Erkuta crater — during a field trip in 2017 after it was discovered by biologists who were in the area observing falcon nesting. The researchers conducted drone observations six months later.
“The main issue with these craters is how incredibly fast, geologically, they form and how short-lived they are before they turn into lakes,” Chuvilin said. “Finding one in the remote Arctic is always a stroke of luck for scientists.” 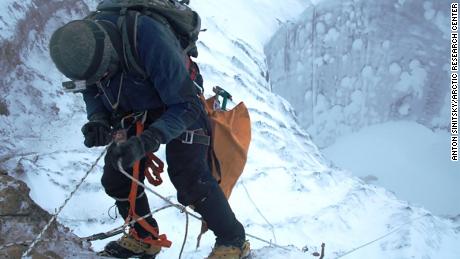 A researcher climbs down the Erkuta crater.
The study, which was published in June, showed that gases, mostly methane, can accumulate in the upper layers of permafrost from multiple sources — both from the deep layers of the Earth and closer to the surface. The accumulation of these gases can create pressure that is strong enough to burst through the upper layers of frozen ground, scattering earth and rocks and creating the crater.
“We want to stress that the studies of this crater problem are in a very early stage, and each new crater leads to new research and discoveries,” he said.

With the Erkuta crater, the scientists’ model suggested that it formed in a dried-up lake that probably had something called an underlake talik — a zone of unfrozen soils that started freezing gradually after the lake had dried out, building up the stress that was ultimately released in a powerful explosion — a type of ice volcano.
“Cryovolcanism, as some researchers call it, is a very poorly studied and described process in the cryosphere, an explosion involving rocks, ice, water and gases that leaves behind a crater. It is a potential threat to human activity in the Arctic, and we need to thoroughly study how gases, especially methane, are accumulated in the top layers of the permafrost and which conditions can cause the situation to go extreme,” Chuvilin noted. Cryosphere refers to portions of Earth’s surface where water is in solid form — ice.
“These methane emissions also contribute to the rising concentrations of greenhouse gases in the atmosphere, and climate change itself might be a factor in increasing cryovolcanism. But this is still something that needs to be researched,” Chuvilin said.
He said his team will publish more detailed information on the newest crater shortly in a scientific journal. He added it’s one of the biggest found so far.

Marina Leibman, a Russian permafrost expert at the Earth Cryosphere Institute at the Russian Academy of Sciences, was part of a team of researchers who have analyzed five gas emission craters using remote sensing data and field surveys.
The researchers found the craters shared some similar features, most notably a 2- to 6-meter-high mound that formed before the explosion. The craters were all also located on gentle slopes and had a lower portion that was cylindrical like a can before opening into a funnel, with the opening diameter around 20 to 25 meters wide. The explosions all ejected ground ice, which in some cases leaves holes where huge frozen blocks have fallen on the surface.
Leibman believed that extremely hot summers in the region in 2012 and 2016, and again this year, may have played a role in the growth and blowout of these mounds. The mounds appear and explode within as a little as three to five years.
“The release of methane from permafrost … is likely caused by rising air and ground temperature over the past decades. The formation of all GECs (gas emission craters) was preceded by anomalously warm summers,” the study, which published in July this year, said.
She said the methane accumulates in a feature known as a cryopeg — a layer of unfrozen ground that never freezes because of its salt content below a table of ground ice — and acts as a trap. The gas then escapes, deforming the ice and earth, to form a mound. And when “heat struck” during a warm summer, the mounds blew out, creating the spectacular craters.
Leibman believed the craters are likely unique to this area of the Arctic because few other areas share the features she thinks are necessary for the holes to form — a combination of table-like ground ice close to the surface, continuous permafrost saturated with methane, and unfrozen ground with saline deposits below the ice.
None of these features have been discovered or reported in the Alaskan or Canadian arctic, according to Susan Natali, the Arctic program director at the Woodwell Climate Research Center, who is using satellite data to try to identify and map craters that haven’t been seen with human eyes.
“The ones that have been found are all in this one region of Siberia — the Yamal and Gyda peninsulas,” she said.
When Natali first heard about these craters, she noted, “It seemed liked such a crazy thing but sure enough they’re real. People haven’t seen that many but they’re happening and they continue to happen.”

Very few people have witnessed any of these explosions take place, but they do pose a risk to the people who live in these remote regions and oil and gas infrastructure, said Vasily Bogoyavlensky, a professor at the Oil and Gas Research Institute of the Russian Academy of Sciences.
He spoke to a reindeer herder who witnessed a massive explosion of a mound on a river channel in the Yamal Peninsula in 2017.
“Every morning she was going to this small frost mound in the river because it was the highest place and she was looking where her reindeer were, and this morning when the explosion happened she came again and she started to feel something in her legs and she was afraid of it and she ran.”
“When she was in the distance — 200 or 300 meters there was an explosion. She could have been killed,” he said. Other craters have formed less than 3 kilometers from railways and an oil pipeline, he added.
Bogoyavlensky isn’t convinced that the primary cause of these craters is warming temperatures linked to climate change. Villages and herding communities he has spoken to have told him that older generations have shared stories of explosions creating craters in the tundra. He said that the “main input” is gas trying to move to the surface from deep layers of the Earth.
Leibman said her team has conducted laboratory tests on methane from some of the craters and she doesn’t think the gas is coming from deep within the ground.
“Our team and others did laboratory tests of the methane from the crater. Its isotope composition proves that this methane did not come from the deep sources,” she said in an email.
“It is hard to exclude air temperature extremes because the first set of craters appeared after (the) 2012 extreme (summer), the other one after the 2016 extreme and the newest after (the) 2020 extreme. Nothing in between,” she added. 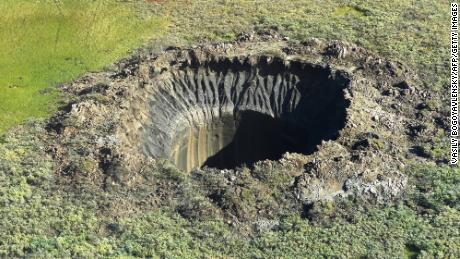 An aerial view taken from a helicopter on August 25, 2014, shows a crater on the Yamal Peninsula, northern Siberia. It was the first to be discovered in 2013.
Likewise, Natali said she believed climate change plays a role — although more data is needed to say definitively.
“There’s been a series of anomalously warm summers in the Arctic. You can imagine that weakening the permafrost layer. Think of it like a cap, if you’re thawing this cap, it’s making the cap a little bit looser, promoting the ability of the ground to explode,” she said.
“It’s like with hurricanes. It took a long time for scientists and papers to come out to say yes, climate change is causing hurricane storms to be stronger. There’s so few of these holes so it might be tricky to say for certain, but I’m pretty confident climate change is playing a role in this.”